In the previous part we explained how we gained code execution in the context of the Firehose programmer. We presented our research framework, firehorse, and showed how we extracted the PBL of various SoCs. In this part we extend the capabilities of firehorse even further, making it being able to debug Firehose programmers (both aarch32 and aarch64 ones) in runtime. Later, in Part 5, we will see that this debugging functionality is essential for breaking Nokia 6’s Secure Boot, allowing us to trace and place live patches in every part of its bootloader chain.

A defining property of debuggers is to be able to place breakpoints. Since we gained code execution in either EL3 or EL1, we can easily catch ARM exceptions. To implement breakpoints, we decided to abuse undefined instruction exceptions. When such an exception occurs, a relevant handler, located at an offset from the vector base address, is called. Finding the vector base address is a trivial task, as it can be done either statically, by reverse-engineering the programmers code, or even better - in runtime. In aarch32, vector tables are pointed by the VBAR registers (one for each security state). Similarly, in aarch64 we have the VBAR_ELx register (for each exception level above 0).

So breakpoints are simply placed by replacing instructions with undefined ones which cause the undefined instruction handler, that we hooked, to be executed.

Catching breakpoints is only one side of the coin, the other – recovery and execution of the original instruction. Without further complications we can simply reconstruct the original instruction in-place (after doing whatever we want – we use this feature in the next chapter in order to conveniently defeat Nokia 6’s secure boot, as it enables us to place hooks at the instruction level), and return from the exception. This method has a small price to pay. Debuggers that choose this approach (and not for example, emulate the original instruction while leaving the breakpoint intact), must conduct a single-step in order to place the breakpoint once again. Unfortunately, aarch32 lacks single-stepping (even in ARMv8). Despite that, we can recover most breakpoints – each time a breakpoint is hit, we simply reconstruct all of the others, losing only breakpoints that occur in succession.

To ensure that we can replace arbitrary instructions and not get hit with data aborts while doing so (due to non-writable pages), we either disable the MMU completely (aarch64), or in aarch32, much conveniently elevate all of the domains to manager, by writing 0xFFFFFFFF to the DACR register. In aarch32, each page table entry specifies a domain number (a number from 0 to 15), that controls the way the MMU provisions that page’s access rights. A domain set to manager instructs the MMU to always allow access (i.e. ignore the access righs completely). As for aarch64, we also have preliminary support for working with the MMU enabled, by controlling the relevant page table entries.

Special care was also needed for Thumb. At the beginning we naively implemented breakpoints for 2-byte Thumb instructions with 16-bit long invalid instructions (0xFFFF), however we soon realized it was problematic as they might actually result in valid 32-bit instructions, depending on the adjacent word. Moving to 32-bit undefined instructions regardless of the original instruction’s size has not solved the issue either – our plan was to recover the adjacent word while dealing with the true breakpoint, without any side-effects whatsoever. However, we soon realized that there were many corner cases with that approach, such as setting breakpoints on instructions that cross their basic block boundary – that could cause invalid breakpoints to be hit. Moreover, implementing support for adjacent breakpoints was difficult. We have finally solved the problem by reading through the ARM Architecture Reference Manual, finding that there is an actual instruction that is guaranteed to be permanently undefined (throw ‘undefined instruction’ exception), regardless of the following word. Its 16-bit encoding is XXDE.

The following example shows the UART output of our debugger running in the context of the OnePlus 5 programmer:

On Xiaomi 5A’s aarch32 programmer the debugger prints the following:

A significant feature of our debugger is that it is fully relocatable, and its memory layout is configurable depending on the target. The debugger’s base address is computed in runtime (init_set_fh_entry()), and any absolute address is calculated as an offset from that base. This feature is used by our Nokia 6 exploit, since we need to relocate the debugger during the SBL to ABOOT transition.

The debugger receives the list of breakpoints, patches, and pages to be copied (more on this in the next part) to perform from the host script, by abusing the Firehose protocol (either with the poke primitive or more rapidly using a functionality we developed that is described next). Specifically, the host uploads the following data structure, to FIREHORSE_BASE + ADDR_SCRATCH_OFFSET:

The inner structures are described here (32 bit) and here (64 bit).

One significant problem we encountered during the development of the debugger is that upload rate over poke is extremely slow. This very poor throughput is due to the fact that each poke only allows uploading 8 bytes (encoded as 16 bytes) at a time, with 499 pokes per XML.

In order to tackle that, we abused the Firehose protocol in the following ways:

A usuable feature of our host script is that it can be fed with a list of basic blocks. This list can be generated using the following IDA Python script:

For example, here is the list of basic blocks generated for the pbl_sense_jtag_test_edl function discussed in Part 1:

Then, one can call our breakpoints manager’s break_function or trace_function in order to break on a function’s entry, or break on all basic blocks, effectively tracing its execution.

Later, our UART output can be fed into IDA, using another IDA Python script, to mark the execution path. ` 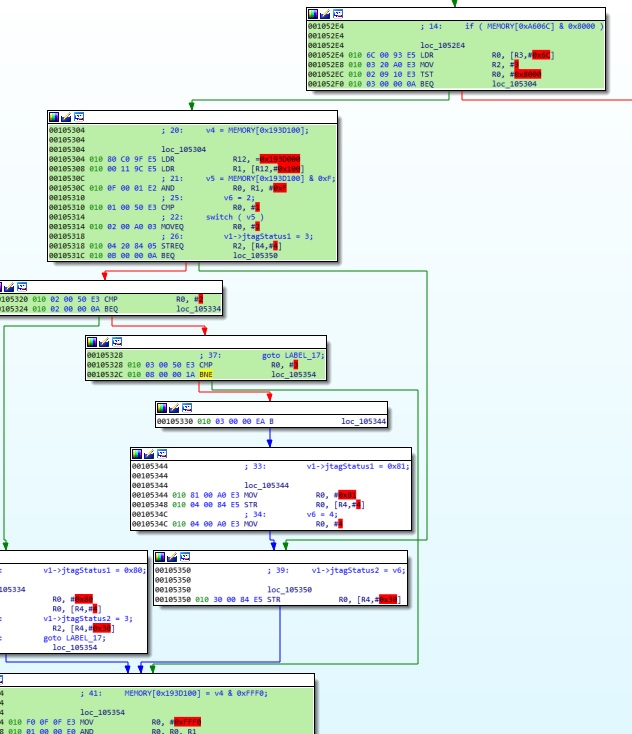 In this part we described our debugging framework, that enabled us to further research the running environment.

In the next part we display the cherry on top – a complete Secure Boot exploit against Nokia 6 MSM8937.