There are many guides [1,2,3,4,5,6,7] across the Internet for ‘unbricking’ Qualcomm-based mobile devices. All of these guides make use of Emergency Download Mode (EDL), an alternate boot-mode of the Qualcomm Boot ROM (Primary Bootloader). To make any use of this mode, users must get hold of OEM-signed programmers, which seem to be publicly available for various such devices. While the reason of their public availability is unknown, our best guess is that these programmers are often leaked from OEM device repair labs. Some OEMs (e.g. Xiaomi) also publish them on their official forums.

A partial list of available programmers we managed to obtain is given below:

In this 5-part blog post we discuss the security implications of the leaked programmers. The first part presents some internals of the PBL, EDL, Qualcomm Sahara and programmers, focusing on Firehose. In Part 2, we discuss storage-based attacks exploiting a functionality of EDL programmers – we will see a few concrete examples such as unlocking the Xiaomi Note 5A (codename ugglite) bootloader in order to install and load a malicious boot image thus breaking the chain-of-trust. Part 3, Part 4 & Part 5 are dedicated for the main focus of our research – memory based attacks. In Part 3 we exploit a hidden functionality of Firehose programmers in order to execute code with highest privileges (EL3) in some devices, allowing us, for example, to dump the Boot ROM (PBL) of various SoCs. We then present our exploit framework, firehorse, which implements a runtime debugger for firehose programmers (Part 4). We end with a complete Secure-Boot bypass attack for Nokia 6 MSM8937, that uses our exploit framework. We achieve code execution in the PBL (or more accurately, in a PBL clone), allowing us to defeat the chain of trust, gaining code execution in every part of the bootloader chain, including TrustZone, and the High Level OS (Android) itself.

The merit of our research is as follows:

An abstract overview of the boot process of Qualcomm MSM devices is as follows:

The PBL kicks-in from ROM after the device is powered-on. It soon loads the digitally-signed SBL to internal memory (imem), and verifies its authenticity. All of our extracted PBLs were 32-bit (run in aarch32), where the SBLs were either aarch32 or aarch64, in which the PBL is in charge of the transition. Some devices have an XBL (eXtensible Bootloader) instead of an SBL. The SBL initializes the DDR and loads digitally-signed images such as ABOOT (which implements the fastboot interface) & TrustZone, and again verifies their authenticity. The signed certificates have a root certificate anchored in hardware.

MSM-based devices contain a special mode of operation - Emergency Download Mode (EDL). In this mode, the device identifies itself as Qualcomm HS-USB 9008 through USB. EDL is implemented by the PBL. Since the PBL is a ROM resident, EDL cannot be corrupted by software. The EDL mode itself implements the Qualcomm Sahara protocol, which accepts an OEM-digitally-signed programmer (an ELF binary in recent devices, MBN in older ones) over USB, that acts as an SBL. Modern such programmers implement the Firehose protocol, analyzed next.

There are several ways to coerce that device into EDL.

Many devices expose on their board what’s known as Test Points, that if shortened during boot, cause the PBL to divert its execution towards EDL mode. (Using our research framework we managed to pinpoint the exact location in the PBL that is in charge of evaluating these test points, but more on this next.)

For example, here are the Test Points on our Xiaomi Note 5A board: 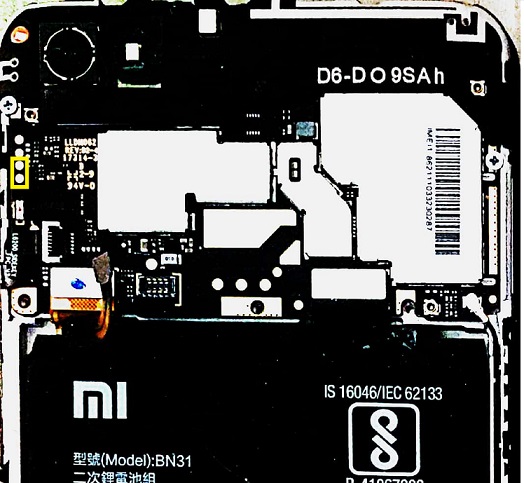 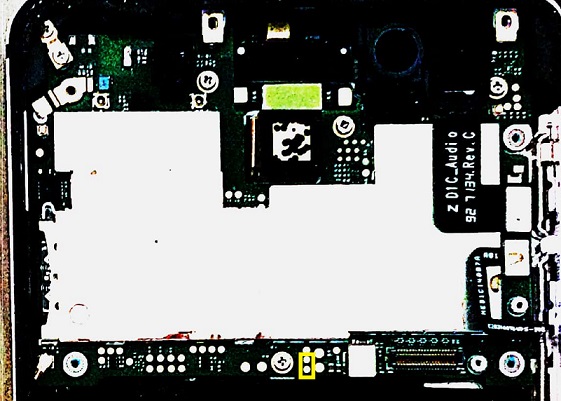 In addition, if the PBL fails to verify the SBL, or fails to initialize the flash, it will fall-back into EDL, and again, by using our research tool we found the relevant code part in the PBL that implements this. Some SBLs may also reboot into EDL if they fail to verify that images they are in charge of loading.

We also encountered SBLs that test the USB D+/GND pins upon boot (e.g. Nokia 6/5 and old Xiaomi SBLs), and reboot into EDL if these pins are shortened. This is known as the EDL or ‘Deep Flashing’ USB cable. Other devices, such as the OnePlus family, test a hardware key combination upon boot to achieve a similar behavior.

Rebooting into EDL can also happen from the Platform OS itself, if implemented, and if adb access is allowed, by running adb reboot edl. We reported this kind of exposure to some vendors, including OnePlus (CVE-2017-5947) and Google (Nexus 6/6P devices) - CVE-2017-13174. Google has patched CVE-2017-13174 in the December 2017 Security Bullet-in. (Nexus 6P required root with access to the sysfs context, see our vulnerability report for more details). Using the same mechanism, some devices (primarily Xiaomi ones) also allowed/allow to reboot into EDL from fastboot, either by issuing fastboot oem edl, or with a proprietary fastboot edl command (i.e with no oem). Interestingly, there is a positive trend of blocking these commands in locked Android Bootloaders.

Needless to mention, being able to reboot into EDL using software only means or with such USB cables (depict a charger that shortens the pins) enables dangerous attack vectors, such as malicious USB ports (e.g. chargers).

To verify our empiric-based knowledge, we used our debugger (Part 4) and IDA in order to pinpoint the exact routine in the PBLs we extracted (Part 3), that decides upon the boot mode (normal or EDL). Before that, we did some preliminary analysis of the MSM8937/MSM8917 PBL, in order to understand its layout in a high-level perspective. We believe other PBLs are not that different.

The init function is in charge of the following:

This struct contains the following fields: (The shown symbols are of course our own estimates.)

Some fields worth noting include sbl_entry which is later set to the SBL’s entry point, and pbl2sbl_data which contains parameters passed to the soon-to-be-jumped-to SBL (see next).

Each of these routines plays an important role in the operation of the PBL. Some of them will get our coverage throughout this series of blog posts.

Loading of the SBL by the PBL & EDL Mode Arbitration

The routine that probes whether or not to go into EDL is pbl_sense_jtag_test_points_edl:

By tracing through this code, we concluded that address 0xA606C contains the test points status (0x8000 <=> ‘shortened’). In addition, rebooting into EDL by software is done by asserting the LSB of the 0x193D100 register (also known as tcsr-boot-misc-detect) The routine sets the bootmode field in the PBL context. Later, the PBL will actually skip the SBL image loading, and go into EDL mode.

First, the PBL will mark the flash as uninitialized, by setting pbl->flash_struct->initialized = 0xA. This is done inside some_sahara_stuff which gets called if either pbl->bootmode is edl, or the flash initialization has failed:

Later, when the PBL actually tries to load the SBL from the flash drive, it will consider the pbl->flash->initialized field and use the Sahara protocol instead:

The PBL later jumps to the SBL entry point, with the aforementioned pbl2sbl_data:

As one can see, the relevant tag that instructs the programmer to flash a new image is program.

Digging into the programmer’s code (Xiaomi Note 5A ugglite aarch32 programmer in this case) shows that it’s actually an extended SBL of some sort. Its main routine is as follows:

pbl2sbl_data is the data passed from the PBL to the SBL at the very end of the pbl_jmp_to_sbl function. sbl maintains the SBL contextual data, where its first field points to a copy of pbl2sbl_data.

ImageLoad is the function that is in charge of loading the next bootloaders, including ABOOT:

ImageLoad starts by calling (using the loop_callbacks routine) a series of initialization functions:

firehose_main eventually falls into the main firehose loop, and never returns. Interestingly, in the actual SBL of ugglite, this series of initialization callbacks looks as follows:

Therefore, they only differ in the firehose_main callback!

Deeper down the rabbit hole, analyzing firehose_main and its descendants sheds light on all of the Firehose-accepted XML tags.

Upcoming Next: Attacking the Firehose Programmer

Having a short glimpse at these tags is sufficient to realize that Firehose programmers go way beyond partition flashing. Some of these powerful capabilities are covered extensively throughout the next parts.

Concretely, in the next chapters we will use and continue the research presented here, to develop: