In the March 2017 Android Security Bulletin, Google released a patch to CVE-2017-0510, a critical severity vulnerability in Nexus 9 we discovered and responsiblity disclosed a few months ago. This vulnerability has a very unusual attack vector – headphones. By exploiting this vulnerability we managed to leak stack canaries, derandomize ASLR, conduct a factory reset, and even access HBOOT, allowing for communication with internal System-on-Chips (SoCs) through I\(^2\)C.

In their BlackHat 2013 paper, Michael Ossmann & Kyle Osborn showed that multiplexed wired functionality exists in several mobile phones. Their research mainly focused on the USB socket. In the paper, they presented interesting results on various variants of Galaxy Nexus. For example, they showed that with Galaxy Nexus running CyanogenMod (CM), one could get access to the FIQ Debugger (see next) together with an unprivileged shell. More severely, on Samsung Galaxy S3 running CM they have also got a root shell. Ossmann & Osborn also briefly documented multiplexed audio connectors, noting that Nexus 4 has a TTL UART interface hidden in its headphone jack, a functionality which is enabled if the voltage on the MIC pin exceeds some threshold.

Fast-forward to 2017, nowadays it’s a well known fact that the Nexus devices (Pixel too) have this kind of functionality in their headphone jack. There are multiple examples of people building and documenting their cables.

We were curious, so Sagi Kedmi (@sagikedmi) suggested we would also assemble our own cable. We decided to go with the standard FTDI232RL breakout board: 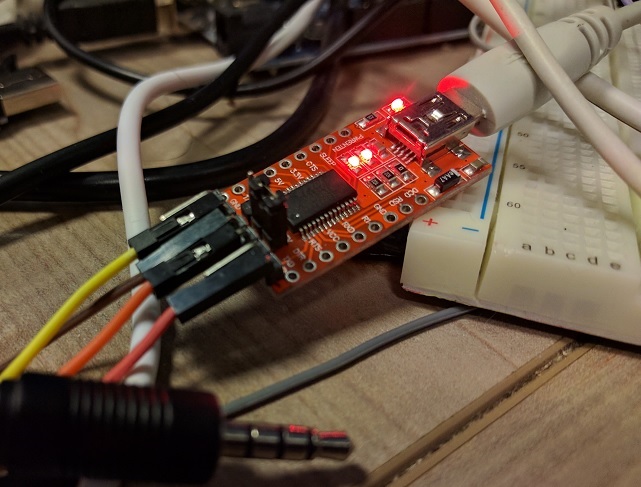 We then tested it over recent Google devices, running the latest available build with a locked bootloader (BL):

All but Pixel C had the multiplexed functionality. It should be noted some devices also required us to enable UART via a proprietary fastboot oem command (e.g oem uart enable). To our surprise, Nexus 9 behaved quite differently, having extra functionalities beyond debug messages, and beyond the FIQ Debugger.

In the next sections we will study some internals behind the vulnerability and its security impact.

When we first booted up Nexus 9 with the UART cable attached, we noticed something familiar:

Similarly to what Ossman & Osbord have shown on older Android devices, one could access the FIQ Debugger on Nexus 9 as well, although without a shell on user (production) builds. It should be noted that the FIQ Debugger functionality is enabled even if the UART cable is inserted when the platform is up.

The FIQ (Fast Interrupt Request) debugger module which we can apparently access in Nexus 9 is implemented mainly by fiq_debugger.c and tegra_fiq_debugger.c in the tegra kernel tree.

Whenever a keystroke is sent to the device via UART, an FIQ is generated, which eventually (and probably after visiting some ARM Monitor mode code) reaches fiq_debugger_handle_uart_interrupt that dispatches the relevant command handler.

In order to speed-up the work of the researcher, the FIQ Debugger interface provides a help command:

The list of available commands clearly indicates the attacker may exfiltrate a lot of sensitive information by interacting with the FIQ Debugger. For example, the attacker can dump the process list:

By using the console command, for example, it’s possible to view the kernel log (similar to other Nexus devices), and receive an unprivileged shell (not on production (user) builds – on userdebug, eng builds only!)

Using the bt/regs/allregs commands allows the attacker to dump the registers, and when falling under the kernel context, the call stack too. Unlike a normal debugger we cannot modify memory and/or place breakpoints, however since the FIQ preempts, the dumped information will be of an arbitrary process. In order to validate this assumption, we first created a tiny app that sets one of the registers to 0x1234 in an infinite loop:

We expected that we will eventually hit the context of the app’s process, with x0 = 0x1234. Indeed:

Listening to your Stack Canaries

Our next step was to prove we can leak something more sensitive – the Stack Canary value of Zygote, which is shared between all Android apps. (Due to the fact all Android apps are forked from Zygote without an exec syscall.).

We first created a small app that dumps the canary to logcat:

And the canary was:

We then created a small PoC that dumps the registers in a successive manner. Eventually we fell under the context of a stack-protected function – reg x26 contains the canary value!

Disassembling near 00000075a02c90cc under system_server shows that it belongs to the art::gc::Heap::AllocObjectWithAllocator function. Indeed x26 is assigned with __stack_chk_guard value:

It is no surprise that being able to view arbitrary CPU contexts with addresses included is bad news for ASLR, which is in charge of randomizing various addresses, such as of the heap, stack, shared libraries and the executable image itself.

In this post we will focus on libraries only, although it should be fairly safe to claim that this vulnerability significantly weakens ASLR for all of the above. As mentioned before, by exploiting this vulnerability one can preempt an arbitrary process, and dump the CPU registers. For example, here is a registers’ dump for Chrome:

Viewing the value of the PC register, 0xeedd5ac8 in this case, clearly reveals some information. However, in order to conduct a practical attack against ASLR, we need to deduce to which library this address belongs and what its base address is.

As for the first part, a statistical approach can be taken. We could calculate, a priori, the hit frequency of each loaded library (with respect to the app). While we did not perform that experiment, we have a strong feeling that the empirical distribution will have a low entropy.

Back to the example, this address falls under libart, the runtime. We assume that there is a high probability to preempt the process (via FIQ) when it visits that library, although unconfirmed. Equipped with this knowledge, how can one derandomize the base address of libart?

We can see that PC’s least significant 12 bits, which are unaffected by ASLR, are 0xac8. We can then take this dynamic information and search for all of the instructions with the relevant addresses – unfortunately there are a lot. Despite that, there are maybe additional registers we can leverage. For example, the link register – LR. This has led to our next experiment: by using idapython we statically searched for all functions that contain an xref from an address that ends with 0x8ef-1-4 or 0x8ef-1-2 (the -1 and multiple instruction sizes are because of THUMB), and that have an instruction at an address that ends with 0xac8.

This script yielded only 6 results under libart (rebased at zero), significantly reducing the ASLR entropy:

One can then reduce the results even further. We made a short experiment, rebooted the device several times a recorded the mapped location of libart.so:

Since libart.so is loaded by zygote, and due to the Android app forking model, it will be loaded into all apps under the same virtual address.

It’s also worth noting that if one still receives multiple candidates, they can be reduced even further. For example, by leveraging other registers, or creating a heat-map within the library itself together with contextual information, as it is possible that hit process does not even (transitively) call some of these candidates.

Conversely, finding no candidates at all, indicates that we chose the wrong libary (e.g. the called code is not of libart.so, but rather of another lib loaded by the preempted process, or of the application itself).

Interestingly, the FIQ Debugger provides a sysrq command, which should provide access to the Linux SysRq interface. Despite that, hitting sysrq after the platform has loaded returns nothing:

Digging into the code which handles the FIQ sysrq command, reveals the reason:

By instrumenting the kernel we witnessed that when the platform is up, both sysrq_enabled and sysrq_always_enabled are 0, thus sysrq_on returns false. The value of the latter can be set to 1 by providing a kernel parameter (which is not provided on Nexus 9, thus the value is 0):

The default value of sysrq_enabled, however, is 1:

Therefore something must change the variable’s value to 0, and indeed, this is done by an Android init script (init.rc):

The /proc/sys/kernel/sysrq proc file is backed by code under kernel/sysctl.c, that eventually toggles sysrq_enabled. Hence there is a short window of time at which sysrq is enabled – during the kernel’s boot, before the init script is executed. Indeed:

The sysrq interface provides additional commands beyond the FIQ Debugger. For example, we can change the kernel logging level in order to leak more debugging messages:

Moreover, a lucky attacker can also dereference some registers:

Our next step was trying to understand if we are limited to the FIQ Debugger prompt, or there are some more hidden gems.

The Nexus 9 bootloader has two modes: HBOOT and FASTBOOT, which can be interchanged via the bootloader UI:

We noticed that when we entered the HBOOT mode, another prompt was received via UART (through the headphones jack):

42: Answer to the Ultimate Question of Life, the Universe, and Everything

It can be seen that through this interface we can trigger many interesting operations. From the attacker’s prespective, however, it is very unlikely that the victim would plug-in the headphones while the device is in the HBOOT mode. As explained above, normally, when the victim plugs-in the malicious headphones, the latter will be able to interact with the FIQ Debugger, implemented by the platform. So how can the attacker force a reboot to HBOOT from the FIQ Debugger? The answer is, unsurprisingly, 42:

Great, we can now easily access the HBOOT interface via UART.

By having HBOOT access, the attacker can interact with I\(^2\)C accessible SoCs. Detecting the available SoCs can be done using the i2cdetect HBOOT command. The following shows the devices which listen on I\(^2\)C bus 0:

For example, 0xe4 and 0xe5 are the read/write addresses of the HTC SensorHub, implemented on an STM32F401 ARM Cortex-M4 SoC. SensorHub, as the name implies acts as an energy-efficient proxy between the main CPU and the actual sensors. It communicates with both ends using I\(^2\)C (different buses). Since the STM32F401 bootloader supports programming via I\(^2\)C, our ultimate goal was to replace the SensorHub firmware via I\(^2\)C, just like the platform driver does. Unfortunately we soon found out it was not possible because booting STM32F4 to its bootloader requires being able to reset the SoC while the Boot0 and Boot1 pins are set to 1 and 0, correspondingly, but we cannot control these pins via HBOOT. Out of curiosity, we digged in the SensorHub driver, CwMcuSensor to see how it performs the firmware upgrade. Indeed it enables the Boot0 pin, via GPIO (the other pin is probably pulled-down):

Although we miserably failed to flash SensorHub, we still wanted to interact with it via I\(^2\)C, proving that we can communicate with internal chips. Therefore we examined its firmware in order to find a few interesting I\(^2\)C registers. Returning the firmware version is done by reading from register 0x10:

Lastly, the attacker can also trigger a factory reset, simply by rebooting with oem-76:

Better back-up your data before connecting those suspicious headphones!

Google has patched the vulnerability by reducing the capabilities of the FIQ Debugger. When the platform is up, it’s no longer possible to dump the registers nor reboot with an oem-N parameter (preventing reboots into HBOOT and Factory Resets):

Issuing reboot oem-42 now results in a normal reboot. As one can see, some commands are still available.